The very first cat-cow I did under the influence of cannabis felt uniquely deep, smooth, and satisfying. “Why don’t I always smoke weed before yoga?” I thought after a dreamy savasana. It’s a question yogi Dee Dussault wondered as well after she combined pot with her pranayama practice. 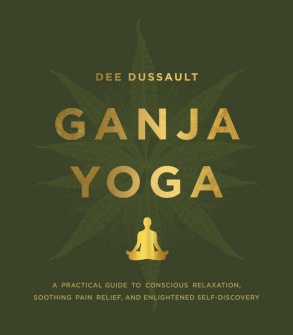 Dussault pairs the two in weekly private classes in San Francisco and has become a sort of godmother to the now-expanding cannabis wellness movement. Her first book, Ganja Yoga, is out on April 18, bringing her message and methods to the masses.

Yoga and marijuana seem like a perfect match in many ways, since both embody a hippie, counter-culture, slow-it-all-down ethos. But there’s resistance to the movement in more dogmatic yoga circles, where teachers see practicing with an altered state of mind as anathema to the real work of spiritual development. (Oh, and the fact that marijuana is also illegal under federal law—and in most states—is another major challenge, although policy and public opinion is shifting toward legalization in a number of places.)

Still, for those willing or able to consume cannabis before they hit their mats, Dussault says there are more benefits than merely getting high to be had. I decided to see for myself.

Here’s what happened when I added ganja to my yoga practice.

In Ganja Yoga, Dussault details how cannabis alleviates stress and anxiety. “When the dose is right and the strain is right, it helps people relax, and that’s sort of the foundation of yoga,” she explains. “You’re able to let go of the distractions—work problems, relationship issues—and to focus now instead on the yoga…on your breath or how your muscles feel.” The book also covers need-to-know basics, like edibles versus vaping, as well as when, where, and how to “enhance” safely.

I followed her instructions first at home, where I lit a candle in my loose, cotton apparel before starting my usual Dirty Yoga video. Having braved the experience indoors, a few days later I went to my local yoga studio stoned.

Instead of running through my grocery list during downward-facing dog, I was tuned in to how each muscle felt and the rhythm of my inhales and exhales.

In both instances, I immediately felt more connected to my breath and body. Instead of running through my grocery list during downward-facing dog, I was tuned in to how each muscle felt and the rhythm of my inhales and exhales. It was like a tiny, invisible thread was tethering me to the present moment. I could also go deeper to stretch sore muscles, because the pot alleviated the pain.

I practiced in the evening, lest I end up giggling at my laptop with a deadline looming. And I tried to be aware of not stretching too deeply, in case the weed made me think I was capable of pushing further than my body was ready for. Overall, though, I would say the benefits of consuming cannabis before class were considerable.

The changes are subtle, but super satisfying. And Dussault concurs, saying the tweaks she makes to teaching ganja yoga versus sober yoga are minimal. “In both cases, I’m a total body nerd and am concerned with making sure people are moving their bodies safely and are focused on relaxation.” Dope.

Other ways to enhance your yoga practice: Learn to do the hardest pose properly or correct these common mat mistakes.

OMG, I forgot to pack a bra to change into after my sweaty workout—what do I do?

Can fruits and veggies ever really be bad for you? Why one healthy eating expert says we need to chill

If an eyelash curler and mascara had a baby, this would be it

I’m not a runner, but in the spirit of marathon season I tried CBD-fueled runs—here’s what happened Sponsored

I’m not a runner, but in the spirit of marathon season I tried CBD-fueled runs—here’s what happened

TBD on whether CBD finally converts me into a runner.